A member of staff was shuffling some cards on their dinner break and we wondered why the Joker was in a deck of cards.

In a pack of cards every Royal number card has a value.

In every deck of playing cards you’ll find the Joker balancing objects precariously about himself, yet despite having no value through popular culture he has become a fan favourite. 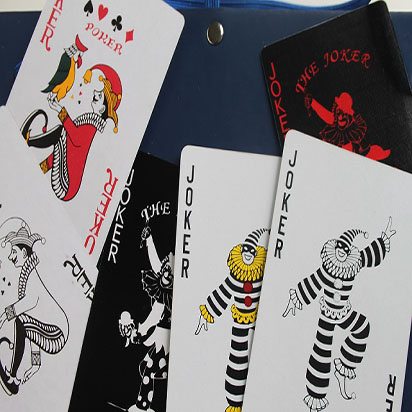 The Joker originated in the 1860’s during the American expansion of the mid-west. At the time the card game Euchre was popular amongst Pennsylvanian settlers and they were looking to heighten the games excitement through the use of a trump card.

This high scoring trump card was called The Best Bower card and in the 1860’s it became known as The Joker.

Through popular media such as The Batman franchise, The Joker has become its own force of nature, inspiring a wide array of films, books and even music.

Two hundred years later and the Joker is still a fan favourite amongst card players, magicians and street artists.

Because of The Jokers inclusion in standard packs of playing cards, games have been made to give it a value such as Go Fish, Crazy Eights and Canasta. Whilst the Joker may not have a fixed value like The King or Queen, its value to the history of card games and conjuring is priceless.